- One of our martyrs, our many martyrs, FRED C. MARTINEZ was born on this date. Martinez was a 16-year-old Navajo boy who thought of himself as female. Another term for Martinez among indigenous peoples is nadleehi or "two-spirit." His friends adored him. Had he been born a woman, one of his teacher's said, he'd have been the most popular girl in town. They also feared what a violent world might have in store for someone like Fred C. Martinez Jr. Martinez died on June 16, 2001 at the hands of a man who beat him to death because he was different. He was beaten to death by one Shaun Murphy who bragged about the killing. Murphy was later sentenced to 40 years in prison for murdering Martinez. Martinez's mother spoke about his son a few days after his murder: No one could say it better:

- "I am his mother and now I want to make sure the truth is told about Fred by people who loved him. With more and more talk about his death, the police looking into his murder, and the details of my son's personal life in the media, it is time to speak the truth about Fred's life. The most important thing I can say is that I loved Fred. I loved my son exactly for who he was, for his courage in being honest and gentle and friendly. It is sad that he had to face pain in his daily life and in school. "What I wanted for my son was for him to be accepted and loved, just like I accepted and loved him. Fred was always proud to be Navajo. Fred did not struggle with who he was, but he was hurt because of the people who had problems with my son expressing himself honestly. I hope that the police and the District Attorney will talk about this and bring justice for the death of my son. I am grateful to Fred's friends for accepting him the way he was and remembering him for who he was. Fred's family loved and cared deeply for all of who he was. We firmly believe that Fred's murder was a hate crime. Because he was different his life was taken from him, and we will never know the person Fred would have become." An excellent documentary film was made about this called Two Spirit Directed by Lydia Nibley. Also Known As: Two Spirits: Sexuality, Gender, and the Murder of Fred Martinez a trailer can be seen and a DVD is available for sale here: http://www.facebook.com/l/48e31stPoxHfoXCqR77Gvg5qufA/twospirits.org

Mardi Gras In the Country~ Terrence Simien and the Zydeco Experience 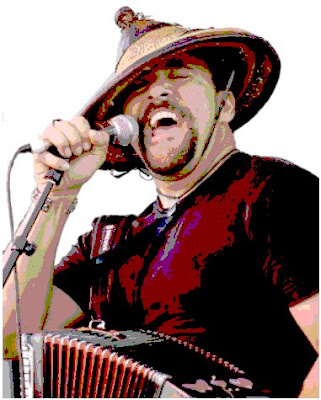 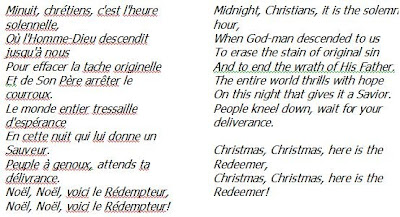 On the 33rd Anniversary of the Asassination of Harvey Milk

So yer takin' the census, eh Mister.
Lemme tell ye about my son.
He was a soldier thet fought fer the North
Until the war wuz won.

This dooryard's now his battlefield.
Lesee, he wuz nigh sixteen
When Sumpter fell and as likely a boy
As this world's ever seen
And what with the news of battles lost
And shoutin' and all the noise
Ah giss every farm in the neighborhood
Lost a part of it's crop of boys.

‘Twas harvest time when Bill left home
Every stalk in the field of rye
Seemed to stand tip toe to see him off
And wave him a fond goodbye.
His momma used to tell him
When she knowed he wuz goin' away
That God’d surely take care of him
If'n he didn't fergit to pray.

And on the bloodiest battlefields
When bullets whizzed through the air
And Bill wuz a-fightin' desprit
He used to whisper a prayer.
His comrads has often tol' me
That Bill never flinched a bit
When every second a gap in the ranks
Showed where a ball had hit.

Then one night when the field wuz covered
With the awful harvest of war,
They found my boy 'mongst the martyrs
Of the cause he wuz fightin' for.

His fingers wuz clutched in the dewy grass,
Oh no Sir, he wasn't dead.
He just lay there sort of helpless and crazy
With a rifle ball in his head.
And if Bill had only died that night
I'd give all I got worth givin'
'Cause ya see that bullet killed his mind
But left his body livin’.

An officer he wrote and told us
How the boy'd been hurt in a fight
But he said that the doctors reckoned
They could bring him 'round alright.

Well, we waited and watched fer a month or more.
The summer wuz almost past
When we got a letter one day that said
Bill had started fer home at last.

I'll ne'er fergit when Bill come home,
"Twas harvest time again.
The air blowing o’er the yaller fields
Was sweet with the smell of grain.
The dooryard wuz full of neighbors
That come to share our joy
And we all set out a rousin' cheer
At the sight of that solier boy.

Then all of a sudden some-one said,
"My God, don't that boy know his mother?"
And Bill stood a-whisperin' fearful like
And starin' from one to another.

Bill seemed to keep loadin' and firin' a gun
And actin' like a man who hears
The awful sounds of the battlefield
A-poundin' in his ears.
Ten thousand ghosts from that bloody day
Was a-marchin' through his brain
And his feet they kind of picked their way
As if they could feel the slain.

He ain’t never knowed us since that day
Nor his sweetheart and never will.
Mother and father and sweetheart,
We all the same to Bill.

And he groans like a wounded soldier
Sometimes the whole night through
And we just smooth his head and say, "Yes Bill,
God'll take care of you."

Irving Batchelder (written in the 1860's during civil war)

For Keeping Your Promise. Without your leadership, who knows when, if ever, this injustice would have ended. 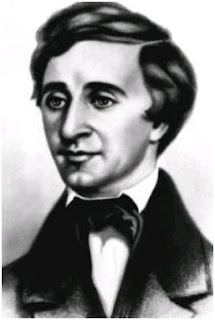 For more go to glbtq.com to which credit gratefully acknowledged for following excerpts:

. . . .Thoreau is perhaps best known for his stay at Walden Pond, chronicled in Walden (1854), and his night in jail after refusing to pay a poll tax to a government that supported the Mexican War and endorsed slavery. He wrote about this latter act of protest in "Resistance to Civil Government," popularly known as "Civil Disobedience," an essay that has inspired many, including Gandhi and Martin Luther King, Jr.
. . . .

Biographers remain undecided about Thoreau's sexuality. He never married. He proposed to Ellen Sewall in 1840, but she rejected his offer. Some believe he was a "repressed" homosexual and others that he was asexual and remained celibate all of his life.

But his Journals, his essay "Chastity and Sensuality," and the long discourse on "Friendship" in A Week are prolific expressions of the beauty, and the agony, of love between men.

Some of these discussions are said to refer to his brother or to Ralph Waldo Emerson. Others clearly refer to two men whom Thoreau found particularly attractive: Tom Fowler, whom Thoreau chose as a guide on a trip to the Maine woods; and Alek Therien, the Canadian woodchopper who visited Thoreau at Walden Pond.

The passion evident in his discourses on love and friendship, and the utter lack of reference to women in his writings, has made Thoreau of great interest to scholars of gay and lesbian literature. Jonathan Katz included a section on Thoreau in his Gay American History. Walter Harding, the distinguished Thoreau scholar, argued quite convincingly in 1991 that Thoreau's "actions and words . . . indicate a specific sexual interest in members of his own sex."

Although Thoreau may not have identified as "homosexual" in the way a twentieth-century gay man might, his rhetoric of sexual difference strikes a chord with gay readers and anticipates an emerging homosexual identity: "I love man with the same distinction that I love woman--as if my friend were of some third sex--some other or some stranger and still my friend" (Journal 2:245).