Celibacy can be a choice in life, or a condition imposed by circumstances.

While attending a Marriage Weekend, Walter and his wife, Ann, listened to the instructor declare, 'It is essential that husbands and wives know the things that are important to each other.'

He then addressed the men, 'Can you name and describe your wife's favorite flower?'

On the "Things could always be worse" front: 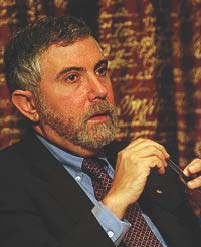 Crapaud's good fren' Mssr. Le Proffeseur Paul Krugman de la Laureate-Nobel, had this to say in the Jan 5th NY Times relating to the POWER of the opinions of the People to influence public opinion for the good. Thanks to Mon 'tit Bougre for sending this along to Crapaud.

What would have happened if George W. Bush had actually succeeded in his plan to privatize Social Security? Ask the Italians.

Italy did for retirement financing what President George W. Bush couldn’t do in the U.S.: It privatized part of its social security system. The timing couldn’t have been worse.

The global market meltdown has created losses for those who agreed to shift their contributions from a government severance payment plan to private funds meant to yield higher returns.…

Gaetano Turchetta, a Rome office manager, made the irreversible move to a private plan after a union representative boasted of the potential for 20 percent annual returns. The 43- year-old father of three now says he would sign with “two hands and two feet” if he could switch back."

Crapaud say: A bullet dodged is one well-worth gunny-sacking for future battle discussions.
Posted by We' Po' Now, Crapaud! at 8:26 AM No comments:

FROM the Primo Blogger, Joe My God joemygod.blogspot.com
I've purloined the following he summarized from Huffington Post today:

The December unemployment numbers are out and things are worse than feared..

The nation's unemployment rate bolted to 7.2 percent in December, the highest level in 16 years, as nervous employers slashed 524,000 jobs. The labor market is expected to remain weak as mass layoffs continue. The Labor Department's report, released Friday, underscored the terrible toll the deepening recession is having on workers and companies, and highlights the hard task President-elect Barack Obama faces in resuscitating the flat-lined economy. For all of 2008, the economy lost a net total of 2.6 million jobs. That was the most since 1945, when nearly 2.8 million jobs were lost. Although the number of jobs in the U.S. has more than tripled since then, losses of this magnitude are still being painfully felt. With employers throttling back hiring, the nation's jobless rate averaged 5.8 percent last year. That was up sharply from 4.6 percent in 2007 and was the highest since 2003.

Crapaud says: It'll get much worse before it begins to get better, but it will get better with bold new leadership.
Posted by We' Po' Now, Crapaud! at 4:27 PM No comments:

A New Year, A New Era 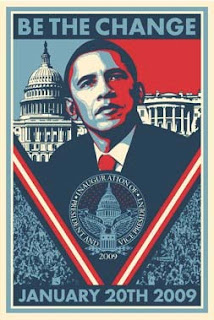 I am filled with Hope today. Maybe that's why I decided to create this Blog at this time. I usually make no New Year resolutions, having learned the lesson many years ago that human frailty and the lack of continuing resolve often lead to a case of the 'shoulds' and little else. But I do hereby resolve to keep my bloggin' brief, if not pithy. So here goes my only thought for today.

Deadline Poet says that Bush's à-goin'
The whole world ceases its mo'nin and gro'nin'
As BHO transits us to a place of Hope
We rejoice that we know we won't miss the Dope.