The U S District Court for the northern district of California, ruled today that California's Proposition 8 violates both the Due Process and the Equal Protection principles of the U S Constitution. The full text of the decision can be found HERE.

This L A N D M A R K decision will now wind its way through the appeals process. Pray that at least one activist Republican S Ct Justice (Kennedy?) will do the right thing by the law in favor of freedom. Otherwise the case will end in a year or so with the ROBERTS COURT 5-4 repeating the Plessy v Ferguson canard of equality.

One of those rare days where my people cry many happy tears.
Posted by We' Po' Now, Crapaud! at 4:14 PM No comments: 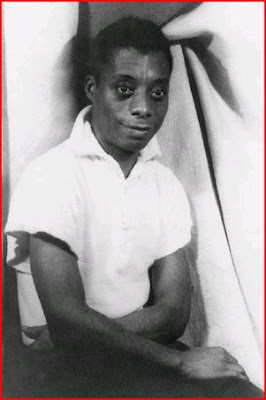 AMERICAN AUTHOR OF ARTICULATE CHALLENGES TO RACISM AND MANDATORY HETEROSEXUALITY

The circumstances of Baldwin's birth were unremarkable: He was born on August 2, 1924, at in to a poor, unmarried, twenty-year-old woman named Emma Berdis Jones. But his death sixty-three years later on December 1, 1987, at his home in southern was an event reported on the front pages of newspapers around the world. Indeed, his journey from a difficult childhood in to his eventual status as a legendary artist with a large and loyal international audience constitutes one of the most compelling American life-stories of the twentieth century.

is a pioneering figure in twentieth-century literature. As a black gay writer in a culture that privileges those who are white and straight, he offered in his work a sustained and articulate challenge to the dominant discourses of American racism and mandatory heterosexuality. As an African-American writer, he ranks among the finest. As a gay writer, he occupies a preeminent place.

Long before the Stonewall Riots of 1969 helped liberate the gay literary imagination in the , he boldly made his sexuality a vital part of his artistic vision. Even more important, by insisting on honest and open explorations of gay and bisexual themes in his fiction, he made a sharp break from the established African-American literary conventions. Through such a radical departure from tradition, he helped create the space for a generation of young African-American gay writers who succeeded him.