Yes We Can, remix 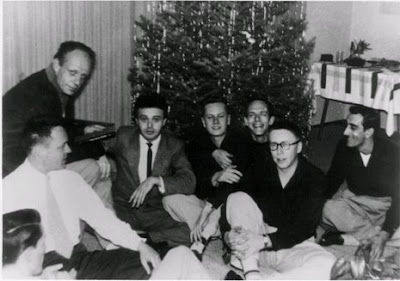 Members of the Mattachine Society in a rare group photograph.

On November 11, 1950, at Harry Hay's home in the district of Los Angeles, a group of gay men met as a group to assert their common societal interests as gay men. Harry hay had been promoting the idea of such a society for several years prior, as he envisioned, to be "a service and welfare organization devoted to the protection and improvement of Society's Androgynous Minority."

Subsequent meetings of the group resulted in the formation of the Mattachine Society. Of the original Mattachine founders, Chuck Rowland, Bob Hull, Dale Jennings pre-deceased Hay; Konrad Stevens and John Gruber are the last surviving members of the founding group.

"Mattachine" took its name from a group of medieval dancers who appeared publicly only in mask, a device well understood by homosexuals of the 1950s. Hay devised its secret cell structure (based on the Masonic order) to protect individual gays and the nascent gay network. Officially co-gender, the group was largely male; the Daughters of Bilitis, the pioneering lesbian organization, formed independently in in 1956. Though some criticized the Mattachine movement as insular, it grew to include thousands of members in dozens of chapters, which formed from to , and created a lasting national framework for gay organizing. Mattachine laid the ground for rapid civil rights gains following 1969's Stonewall riots in .